What is Reportedly you ask?

Reportedly is a tool to help you keep your investors/mentors/advisors (or your entire team) in the loop.

Rick and I have both been on the sending and the receiving end of status reports. We know how valuable they can be. But we also realize that – when things get hectic – status reports are one of the first things founders put off. Often, at a time when they are needed most. We built Reportedly to help ease the burden of creating status reports, making the interactions between you and your entire team – both inside and out – more valuable. 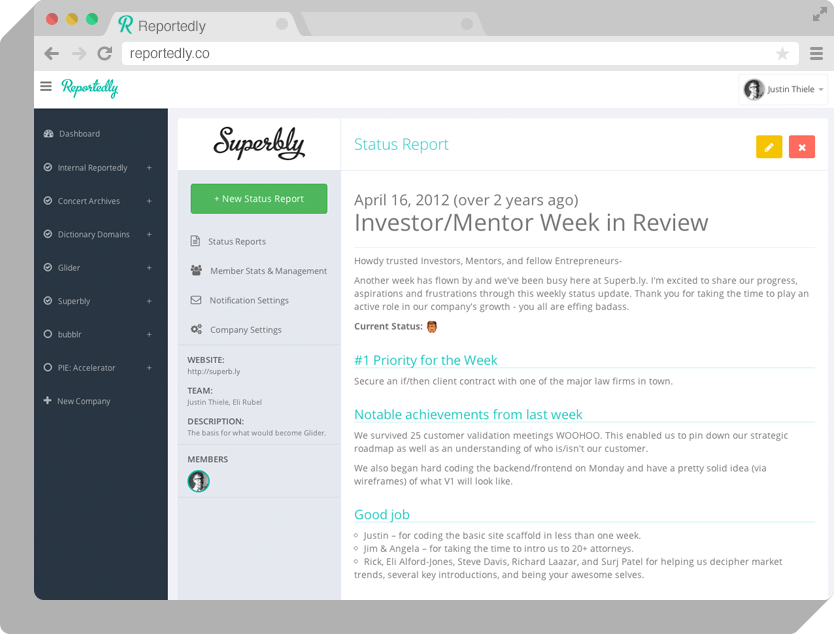 Every Status, Ever
No more digging through email threads. With Reportedly, you always know where your status reports – and your team’s feedback – can be found. With full status report history, new advisors and investors can get up-to-speed in a matter of minutes. And they can manage every company they work with, from one dashboard.

Obvious Engagement
Ever wondered if your investors are getting to your updates? Or which advisor is most interested in your progress? Reportedly highlights your team’s activity – monitoring every message read, every like, and every comment – so you always know who is engaged. And who might need a little nudge.

Enabling Conversation
We’re working to make this easier. On everyone. No matter how busy you are. That’s why you get: